In Chapter 4 - Setting up Grasping, Exercise 6.2
After the robot has detected the box and reached close to grasp it, the robot gripper failed to lift the box. Its location and pose are correct during the grasping phase. The box doesn’t move along the z-axis and remains attached to the table, although the gripper narrows its fingers to grasp it by the default amount (0.036 m) , and the box moves slightly sideways after the grasping was attempted.

we tuned such parameter namely max_effort in shape_grasp_planner in different values were tested and this was the case in every scenario.

Can you please suggest a solution to this issue? 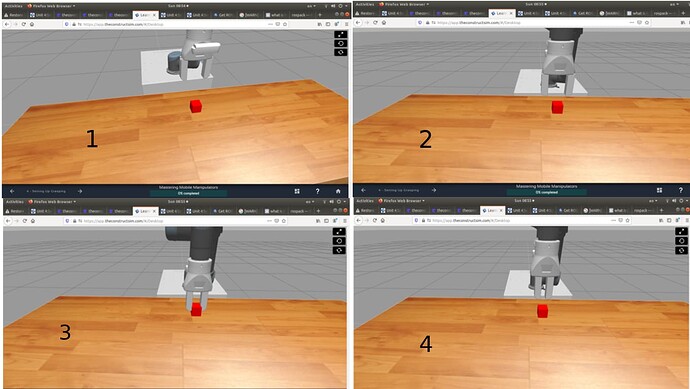 There was an error from our side and the Gazebo grasping plugin was not loading properly. I’ve already fixed it so now it should work OK. Could you try it again?

Thank you Alberto for the fix.

After testing it picks up the box there seems to be an unexplained or unstable behavior every time the launch file is called. (this was made in different times, with no modifications to the files).