[SOLVED] How to remove a rosject from recent rosjects in homepage?

I have a rosject in my homepage under “Your recent rosjects” that I would like to remove.
I added it by mistake. I do not know how to remove it. 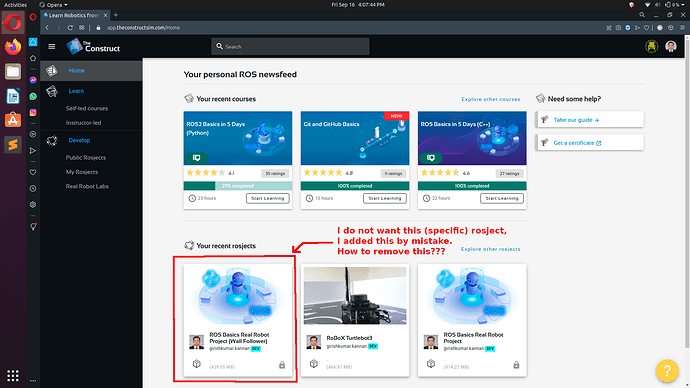 Thanks in advance,
Girish

What do you mean by you “added it”? That list is automatically generated from the rosjects you have opened recently.

If you want to see a different list, keep opening other rosjects

. Unless, of course, you want to delete the rosject as @GasPatxo indicated.

@GasPatxo , I never noticed the bin symbol. Thanks!

@bayodesegun , I launched the rosject from real robot lab bookings page and it gave me three options to choose from - navigation rosject, wall follower rosject and mapping rosject. I selected the wall follower rosject and apparently it is not the project that I forked from the ROS Basics course. That’s why I wanted to discard that.
In my image, the third rosject is the rosject I was actually working on. The second one got automatically added. The first one was the rosject I chose by mistake.

This topic was automatically closed 2 days after the last reply. New replies are no longer allowed.