Hi @staff, I was trying to do the exercise U3-2 from URDF module. I have some issues/questions about:

1 - Add Extra Joint to rotate around yaw axis: Ok I did, as can be visualized in the figures below:stuck|690x388 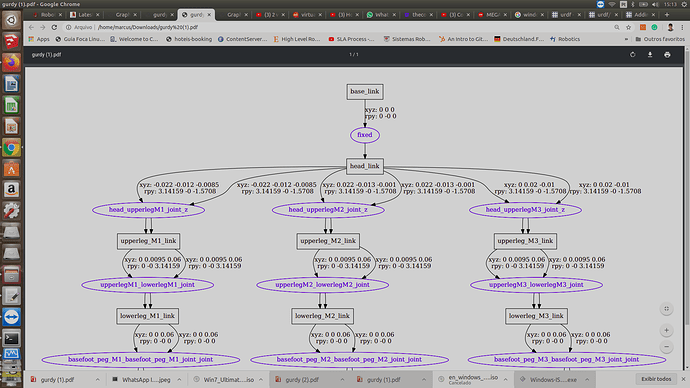 The problem I have realized is that the previous revolute joints (which turns the upperlegs around pitch axis) are present, however, became static, in other words, the pitch move was freezed, not allowed, just the yaw joints work now…In this case what should I have done? The idea was to add a DOF also in yaw axis, and in this way just add number 1 in yaw space, when configuring the joint axis of rotation? I don’t think so, because if I put two degree of freedom(turn over 2 aixs) for the same joint, I would need 2 different upper and lower limits, as well as effort and velocity, right? So…I am confused about that.
2: I created the camera link over the antenna, as asked. But when I run rqt_image_view (after launch the simulation in Gazebo and the python move gurdy script), I could not access the camera…
3: I have changed the fixed joints for prismatic joints for all the feets, it worked “well”. But when I set upper limits to the legs slip over the joints…such as telescopic cylinders…the result was that the legs were flying over the feet, “disconnect” from them flying over the “sky”…I also don’t think so that this is the right way.
For last, the launch file which worked before, does not work anymore…one reason is that I forgot to add the new joints configured for this model in yaml file right? However, when I launch this file…it appears now to me 12 legs instead just the first 6 (lower and upper). Why? IS this because of the extra joints configured before in exercise 1? And there are 6 joins connected to the head and the others are far from the head…disconnected.

I will try the exercise U3-3 now. I think I also will have some issues…but I would like to see the solution to repair it…as I would like to do now with U3-2. However I did not find. Could you send me please?

So you have loads of questions and request here. Lets go step by step:

Please share with us the code and form my side I’ll update the notebooks with a solution for that as soon as possible so that you can compare and have a refference.

Thanks for all your questions and feedback. All this make our courses each day better ;).

I have already solved @duckfrost I have solved this issue thanks for the hints. I would just ask for the solutions from U3-3 if possible. And ask your e-mail to re send the doubt I have sent to Simon and Alberto about the xacro file I have created for Gurdy alternative version…It is spawned by Gazebo but in Rviz I am having Tf issues…Could you share your email please? About git you recommended me doing… Is there a tutorial?

As for how to use git, here is a very nice course on it: Git Tutorial

I just uploaded the solutions for 3.2 and 3.3. There are in a link at the bottom of the URDF course UNit3. There ou will find the updated version of gurdy and the scripts for jumping, IMU detection of falling and moving gurdy with cmd_vel topics. Hope it helps you to understand better the course.

Thanks very much @duckfrost you are the Best! an Angel! I will study it!!!
Have a nice night!