I am on Exercise 4.1 where we are supposed to copy the provided code to a ‘rotate_robot_integration_test.py’ file in the test directory in the robot_control package.

I have done that and run the ‘rosrun robot_control rotate_robot_integration_test.py’ to see the test result on the CLI, but it goes in the suspended state. I used Ctrl+z to exit and thought it could be a catkin_make issue.
So I ran the catkin_make and sourced the devel/setup.bash in all the terminals. I ran the command and it is still not giving the appropriate test result. The xml file is empty as well. 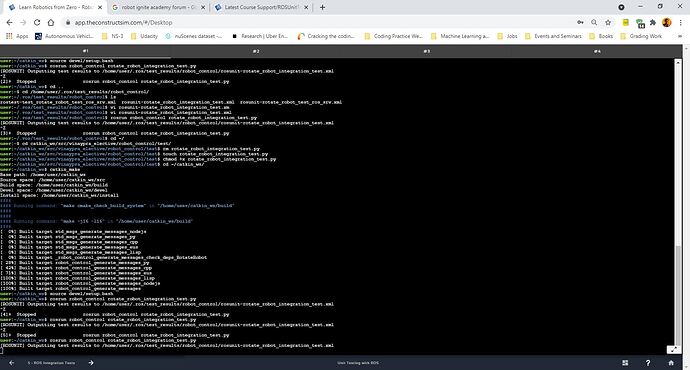 Expected output as included in the course notebook:

Please advise. Thanks a lot.

thanks for reporting the issue.

With a quick look, I can think of two things that could be wrong:

where NUMBER is an integer.

After that, ROS_MASTER_URI should be ok if it was not ok before.

But even if ROS_MASTER_URI is correctly set, I see that the test is waiting for a service named rotate_robot.

With rosservice list, can you find any service named rotate_robot? If not, maybe you need to run a node that provides that service before running the test.

In any case, we are going to review this course deeper to see what may be wrong in the course.

@ralves , thank you for your response. I will check these and report back by tomorrow.

I’ve tested both unit3 and 4 and it worked.
There might be some small issue sometimes, that it seems more related with ROS timing and the simulator:

But as far as the reported issue goes, if you launch previopusly the service through teh command given in unit 3, it should work without issues: